The Esoteric Essence Of Easter

Easter is a time for reflection and contemplation and provides us with an opportunity to renew, align and consider our journey of spiritual growth and transformation. Easter can help us connect at a much deeper level, to our own intuitive connection to the great mystery of Life.

Awakening to ‘Christ Consciousness’ is a fundamental aspect of the Alchymie. Therefore, Easter and the acknowledgment of One who is alive as Christ Consciousness is something we take time to contemplate and remember. Here’s a little insight into the Hermetic understanding of this powerful time of year and how the Alchymie of the Energies can assist in making this a time of real growth and transformation.

What Is Christ Consciousness?

Christ, or ‘Christos’, is a Greek word meaning the ‘anointed one’ and is another way of saying God-realisation, or the resurrection of Consciousness. Jesus of Nazareth was one who was awake as the living demonstration of Christ Consciousness, thus he is known as the Christ. But Christ Consciousness is not tied to an historical event and exists now as all realised beings, animated always and forever by the same Heart that lives us all. Ultimately, everyone must aspire and attain the Christ Consciousness, to awaken as Only God.

This is significant in that the raison d’être of the Hermetic Art, is the awakening to Christ Consciousness. It is as though we have reached a time when the expression of the essence of the Alchymie can be revealed in the truth of what it is.

Historically the passage of the death and the resurrection of Jesus Christ, held within the period of Lent and Easter, has been a significant event over the last 2000 years. When truly aligned to that passage, when truly experiencing it as a reflective consideration, we within the Hermetic Art, have made true use of the passage in the esoteric essence to which we have awoken to understand as its gift. The literal awakening of an individual to one’s own heart intuition and to be able to live that, is the significance of such an event.

The journey of the cross in the tradition carried by Christ, in esoteric terms, is revealed as that which we in our own journey of awakening, must allow

ourselves to feel. The cross represents the vertical or social persona of which we identify within mortal form. The horizontal line being the awakening to that which is prior, or allowing the heart to truly awaken in its fullness across the horizontal plane. In order for that to occur, one must suffer the cross of one’s own existence. One must truly allow the death of egoic life, the death of where identification, differentiation and desire, revolve around creating the egoic personality which we have endured and built up over lifetimes. The lesson of this life is that the undoing and sacrifice of the frontal line, is the death of separative self – the death of the ego – the death of egoic life and the submission or heart awakening, yielding with the arms wide open to allow the cross of our own existence to be felt, known, lived, breathed and made manifest whilst alive.

There has not been the possibility of resurrection of Consciousness because it has been blocked by this dark epoch – the Age of Darkness, the layering of mindedness, the exoteric relationship to existence and the build-up of what has concretised as the cloak of doubt. So the significance and the wonder and unlocking of this passage is what this period can truly become for us through the use of these Alchymeic Energies.

*There are many Alchymeic Energies that directly support our transformation during this Easter period.
Please contact Hermes or your nearest Hermes representative for more information.

Have You Got The Easter Energies Ready?

Igniting the true spirit of Easter within us all…

Easter is just around the corner and there are some wonderful Alchymeic Energies to support us at this time. These Energies have been carefully selected to be part of our Easter collection. If you would like to order any of these, please contact Hermes or your nearest representative. Many of you already have these Discs and we recommend you start engaging them in the lead up to Easter by including them in your daily meditation and energy work.

.Easter Elixir Disc
Recognition of the Intuitive Heart of Love and the Awakening of the Eternal Heart of Real Consciousness. The Crucified One submitted to His existence shines forever in the Heart of mankind as the hope beyond the consciousness of death of the usual man or woman –  the True Form of Eternal Life or the One who was never rendered within the usual circumstance of this earthly vision.

The Judas Script is clearly about the historical event of the betrayal of Jesus of Nazareth. The betrayal took place as a direct result of the impenetrable
intellectuality of Judas Iscariot… The destruction of the heart of love, can be seen at last in the light of Truth to be simply the destruction of our own heart. Therefore it is imperative that we awaken to the contrite heart and confess our complicity in this primary betrayal of the heart of love which is now entrenched as the norm of our superficial ritualistic cultural interactions, where like the Stepford Wives, we bypass all levels of actuality and therefore reality…

.
Divine Communion or Bust – Disc Energy
Abide in Communion with the eternal Truth now and forever more, what else is there?
Being Responsible for Our Existence – Disc Energy
As we come to understand that in this ‘place’ there is death, we begin to grasp the import of being responsible for what we amount to whilst alive. Carrying this Truth close to our Hearts, we are spontaneously drawn to move as Love. This Energy is about seeing what it is we must become accountable for in our own case and transcending the apparent limitations upon living as a Loving, Healing Presence in this world.
.

Behold, I Make Everything New – Disc Energy
Wiping everything clean. We start again with the contemplation coincident with the truth of Only God.

Divine inspiration is maintained in our courageous walk of love and devotion.

Baptism By Fire – Disc Energy
Alchymie is commonly known as the transmutation of base metal into gold. In our understanding, this statement is a metaphor, being that it is the person that is the base metal. So it is about enlightenment – the gold of enlightenment. What is Alchymie? Alchymie is a mystical transformation of celestial proportions that is characterized by slow and steady heat. Alchymie is constantly tended through steady discipline to enact what is truly a miraculous transformation of mankind into God.

It is difficult to remain loving in a world that feels threatening on many occasions. It follows that we cannot remain in a self-contracted, self-protective position and love at the same time. The restoration of our power through perfect vulnerability can enable a renewed response.
The Last Drop Flowers – Disc Energy
The Last Drop of blood of the Sacrificial Lamb spills from the body. The perfect yielded sacrifice is made – everything is given not one ounce is held back, all is yielded for the sake of all. The vision is seen of the Last Drop falling from the perfectly yielded form, sitting in the lotus position, dropping through the lower coil upon the earth. It begins to seed and grow, the roots take hold – Truth surges up through the bodily base into the flowering of the navel and solar plexus. This Disc is for all who will partake in this Sacrifice, who will allow this great matter of Truth to enter this place through their whole body recognition and submission to Grace. Truth will take hold here – we are the seeds that must awaken and allow this great flowering for the sake of all. 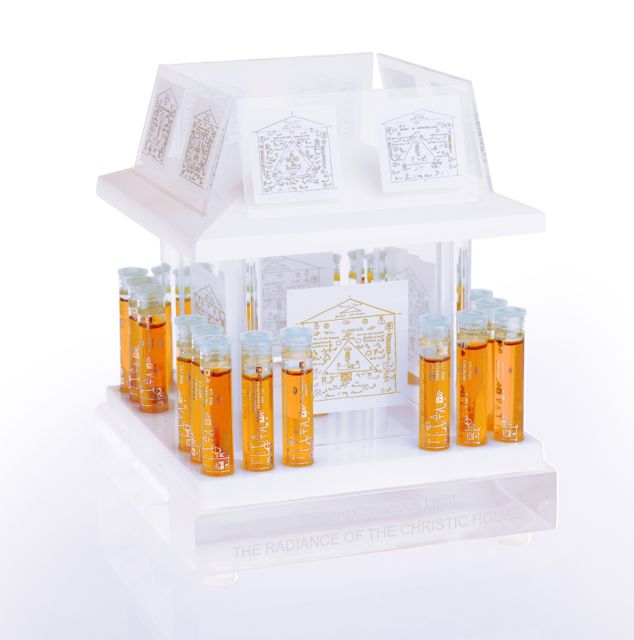 The Christic House is literally the resurrection of Conscious Light, now made possible by the ending of the Age of Darkness as individuals awaken beyond the karma. The transition to this next epoch, the Age of Light, has begun…

The vision that appeared was of the cross as the passage or doorway through to the new world. The cross is requiring the standing ‘upright’ of Cosmic Man, or the Enlightened form – dissolving the frontal line (vertical), and opening along the horizontal line through the heart and its expanse. Thus breaking through the darkness of this dimension and fixity where exotericism has ruled and crushed the intimate Heart of Love, or the intuition of the Divine that is inherent in every being.

The raison d’etre of this Hermetic Art is the awakening to Christ Consciousness, or the cross of our existence – being able to live it, understand it and beginning to love one another as it. This is the gift of this Christic House.

To view the Christic House in our online shop, click here>

Here is a list of Energies on the Christic House and an example of one of the Vial Energies.

Initiatory Christic Passion – (holds the initiation process). Holds the seed to the alchymeic fire and transformation.